The Ireland India Institute is delighted to invite you to the inaugural lecture of its 2018-2019 Lecture Series with Dr. Priyanka Basu, The British Library, London presenting:

Music, Mobilisation and Identity: Understanding the Cultural Politics of Matua Kobigaan in West Bengal and Bangladesh 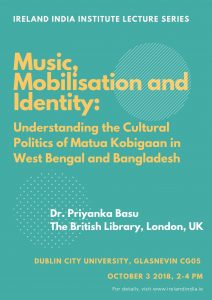 Dr. Priyanka Basu is the Project Researcher on the AHRC-funded digitization project, Two Centuries of Indian Print at the British Library. She received her PhD degree in South Asian Studies from the Department of South Asia, SOAS London. Her thesis, “Bengali Kabigan: Performers, Histories and the Cultural Politics of ‘Folk’” was completed on the Felix scholarship. She is working on a monograph based on her doctoral thesis. Her research interests include theatre, performance and film histories, book history, gender and Dance Studies. She has published articles in the Journal of South Asian History and Culture and has presented her research at international conferences including BASAS, IFTR, and ECSAS. She has taught as a Guest Lecturer in Calcutta and at SOAS in courses on “South Asian Culture” and the “Politics of Culture in Contemporary South Asia”. She is trained in the Indian classical dance form of Odissi and has performed in Japan, India and the UK. In June 2016, she was one of the participants at the Nrityagram Summer Workshop in India. In her current research project, she is looking to write a cultural history of the itinerant theatre company, Shakespeareana in South Asia and following from its tryst in the Second World War.